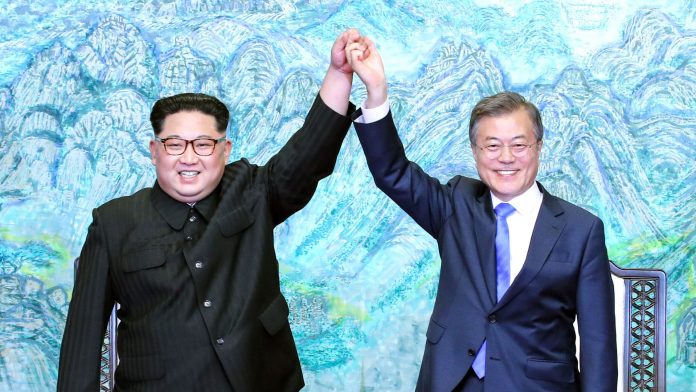 The announcement was made by the North’s Kim Jong-un and Moon Jae-in of South Korea after talks at the border.

The two also agreed to push towards turning the armistice that ended the Korean War in 1953 into a peace treaty this year.

Speaking at a banquet after Friday’s talks, Mr. Kim hailed the progress he said had been made.

“We bade farewell to the frozen relationship between North and South Korea, which was a nightmare. And we announced the beginning of a warm spring to the world,” he said. 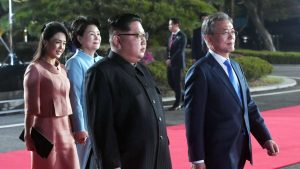 What is in the agreement?

Details of how denuclearization would be achieved were not made clear and many analysts remain skeptical about the North’s apparent enthusiasm for engagement.

An issue for the North is the security guarantee extended by the US, a nuclear power, to South Korea and Japan and its military presence in both countries.

Previous inter-Korean agreements have included similar pledges but were later abandoned after the North resorted to nuclear and missile tests and the South elected more conservative presidents.

Kim said the two leaders had agreed to work to prevent a repeat of the region’s “unfortunate history” in which progress had “fizzled out”.

“There may be backlash, hardship and frustration,” he said, adding: “A victory cannot be achieved without pain.”

Other points the leaders agreed on in a joint statement were:

The commitment to denuclearization does not explicitly refer to North Korea halting its nuclear activities but rather the aim of “a nuclear-free Korean peninsula”.

The two countries have also agreed to seek international support to reach this goal, the joint statement says.

What do China and the US say?

China later praised the political determination and courage of both leaders and said it hoped the momentum could be maintained.

Kim Jong-un is due to meet Trump in the coming weeks. Speaking in Washington, Trump said the meeting would take place in one of two countries under consideration and vowed he would not be “played” by the North Korean leader.

“We will come up with a solution and if we don’t we’ll leave the room,” he said.

New US Secretary of State Mike Pompeo – who earlier this month travelled secretly to Pyongyang to meet Kim Jong-un – said his impression was that Kim was serious about reaching a deal.

“The economic pressure put in place by this global effort that President Trump has led has led him to believe that it’s in his best interest to come to the table and talk about denuclearization,” he said, speaking at a Nato meeting in Brussels.

How did Friday’s summit unfold?

The leaders were met by an honor guard in traditional costume on the South Korean side. The pair walked to the Peace House in Panmunjom, a military compound in the DMZ.

Kim then invited the South Korean president to step briefly across the demarcation line into North Korea before the pair stepped back into South Korea – all the while holding hands.

It was an apparently unscripted moment during a highly choreographed sequence of events.

The two leaders spoke together during a session broadcast live on South Korean TV.

Kim jokingly apologized to Moon for repeatedly forcing him to get up early because of the North’s missile and nuclear tests.

“I heard you [President Moon] had your early morning sleep disturbed many times to attend National Security Council meetings,” he said. “I will make sure that your morning sleep won’t be disturbed.”

“Now I can sleep in peace,” Moon replied.

Kim also acknowledged that the North’s infrastructure lagged behind that of the South.

“I’m worried that our transport situation is bad, so it may discomfort you, it may be embarrassing [for me] if you visit North Korea after living in the South’s environment,” he said.

After separating for lunch, the two leaders took part in a tree-planting ceremony using soil and water from both countries.

They later attended a banquet where Kim was expected to be served the Swiss potato dish rösti – a nod to his time studying in Switzerland – along with the North’s signature dish of cold noodles, and a North Korean liquor.

Mr. Kim was accompanied for the symbolic discussions by nine officials, including his powerful sister, Kim Yo-jong.

How did we get here?

Few had predicted a development like this, as North Korea continued its nuclear and missile tests and stepped up its rhetoric through 2016 and 2017.

The following month the two countries marched under one flag at the opening ceremony of the Winter Olympics, held in the South.

Kim announced last week that he was suspending nuclear tests.

Bill - June 15, 2018 4
Science and knowledge Since the beginning of human life on earth, man has seen many phenomena and things that need to be discovered, knowledge and...