HomeArtDidn’t Harry potter get tired of the highest records ?
ArtEntertainment 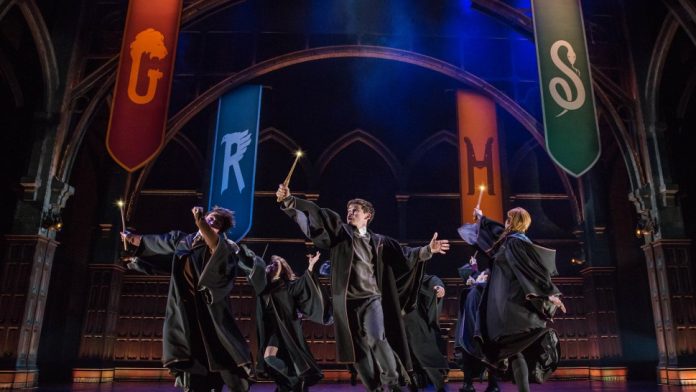 Harry Potter continues to amaze us, not only with its exciting events, but with its great profits, including 500 million sold copies of books, and $ 7.7 billion total movies profits around the world. We are facing another high record that will be achieved through a bigger budget than any non-musical play throughout history. With the $ 68.5 million, New York’s famous Broadway theaters hosts Harry Potter and the Cursed Child. Which began its initial performances but will officially open on 22 April 2018. The cost includes $ 35 million for the capitalization of the show, which is more than any non-musical play budget throughout history, and another $ 33 million for theater evacuation and reconstruction. Yes, that’s a big risk in a failing industry, but according to a report in The New York Times said that it seems to be a safe risk too, as the expectations are the play will be a huge hit on Broadway, by playing it for so long that it can generate profits for years. Tom Vertel, executive director of the Institute of Commercial Theater in New York, “of course it’s a huge amount of money, compared to the cost of the shows here, but it’s about Harry Potter, one of the most famous brand names in the history of brands, so the play has a name we rarely see on Broadway.”

Have the initial performances succeed?

Even in the initial performances, and while the team is still grouping for its positions and the creative team is still making adjustments, the show delivers a high record of outcome. When Harry Potter lovers filled Lyric theater – one of the biggest Broadway theaters –, at the first week of April 2018 (through the initial performances) the play has achieved $ 1.2 million, more than any outcome any play has achieved in a week. the standard capitalization of $ 35 million, was raised from producers and investors to pay the expenses of an exceptionally big crew from actors and playwrights, to train on an unusually long show and to produce extraordinarily delicate work in files submitted to the Securities Commission And stock exchanges. It appears that most of Broadway’s non-musical plays’ coast is between 3 to $ 5 million, even the most drawn attention plays, it’s rarely to cost more than $ 25 million.

There were victims for this stunning show in New York, the British Ambassador theater group company, which currently runs the Lyric theater, has spent about $ 23 million to convince “Cirque du Soleil” company, that was formerly occupying the theater, to end their musical plat Paramour and makes room for “The Cursed Child”, according to what the newspaper has reported from two people aware of the deal. Ambassador Theater Group company, which competed with other owners of Broadway theaters for the play “The cursed Child”, has made extensive repairs to Lyric theater at the request of the producers of the play. After the theater became like an unattractive barn (for being a home to a series of failures, including the $ 75 million Spider-Man: Turn Off the Dark), it was rebuilt to resemble an old-fashioned opera house with a vaulted ceiling, with a number of compartments and 1622 seats (down from 1896). Even the entrance was moved from the busy 42nd Street to the less busy 43rd Street. The building is expected to cost about $ 10 million, according to documents submitted to the New York City Department of Buildings.

The two-part play, last more than 5 hours, is a sequel to the young fiction series written by Joan Rowling, the British author who created the magical boy character. The “Cursed Child” happens 19 years after the events of the last book, when Harry and his friends became fathers. It is noteworthy that the British author Jacques Thorne is the one who wrote the play based on the story of the book with Joan and British director John Tiffany. The play was staged in Britain, and all its tickets were sold in the West End area of London for 22 months. Last year (2017), it won the Nine Olivier Awards – the British equivalent of the Tony Award for theater, including – the Best Play award. A third opening for the play is going to be in Melbourne, Australia next year (2019).

We don’t want to cross the line.

Walking through the theater shows phoenix candlesticks and lanterns in the form of a dragon, and a wall in the hall with paintings of Petronas (silver guardian animals from the creatures of the Harry Potter world). The color scheme of the theater is rich and dark. Most of the walls are painted in an almost black color, called dusty-gray, with a specially designed carpet featuring monograms of the letter H (relative to Harry’s school Hogwarts). The newly decorated out front has giant wings and huge statues of a child locked in a cage. “We wanted to create a mood without crossing the lines and becoming an amusement park,” said Colin Calendar, one of the main producers. “It was really important to us that the lobby and the theater stand had the atmosphere of the Harry Potter world, because this is the beginning of the public experience,” said Sonia Friedman, another main producer. and she added, about the high cost of working on Broadway, the play cost much more in New York than in London, as the cost of hiring, marketing and theater in New York often more. “I see the cost here is difficult to understand, it’s a number I do not like,” she said. However, she also said that certain aspects of the “Cursed Child” were making it expensive. The two-part play required twice as much time as the exercise, and the fine effects involved required great techniques and additional training. Installation of only theater elements took 16 weeks.

Salaries are increasing … Is it worth it?

The salaries of the crew of the play is much more than the salary of most of the other plays. Calander and Sonya said the administration had assembled a crew of 220 people to prepare, scenes decoration, lights and costumes. The show includes40 actors, a theater team of 26 people, about 16 people in the clothing and poetry section and 5 theater directors. “It seems clear to me where the money has gone,” said Jonathan Rosenthal, 38, an IT consultant who runs a group of Harry Potter fans, who watched the play in Broadway earlier this month (April 2018),” And the level of expertise is not comparable to anything I’ve ever seen on Broadway. It looks like magic is on the stage”. Most Broadway tickets already ran out in March 2018, although there are regular releases for more tickets, including some low prices tickets every Friday. The average ticket price for each part of the offer was $ 164.83, while the maximum price per ticket was $ 286.50, and the cost of 300 seats per show was about $ 40 or less. Note the possibility of seeing both parts on the same day or on consecutive days.

Of course, British author Joan Rowling will be one of the biggest beneficiaries. It is true that the investment papers do not mention her share in detail, but it says that the “owner of the basic rights and licensees and their subsidiaries” – a group that includes Joan – will initially get 31% of the net profit of the play and will eventually increase to 41% with the increase in the profitability of the show. She can also make use of the play in other ways; she is the third major producer of the show represented by her company Harry Potter of theatrical productions. Her deal seems more lucrative than the deals negotiated by other authors who wrote literary works that turned into Broadway theater shows. For example, the late US author Harper Lee signed an agreement that gives her 2.5% of net profits, as well as her ownership rights as an author, to convert her novel “To Kill a Mockingbird” into a play that will be presented in the next stage (the money will now go to her estate), while Ron Cherno, author of the biography of late US leader Alexander Hamilton, gets 1% of Hamilton’s adjusted gross profit. However, these comparisons are limited; as fiction writers generally get a larger share of profits than non-fiction writers because novelists make up their characters. This is applies on the play “The Cursed Child,” which is not based on an actual novel; but a new story specially written for the theater.

Superman movies heroine died at the age of 69 years