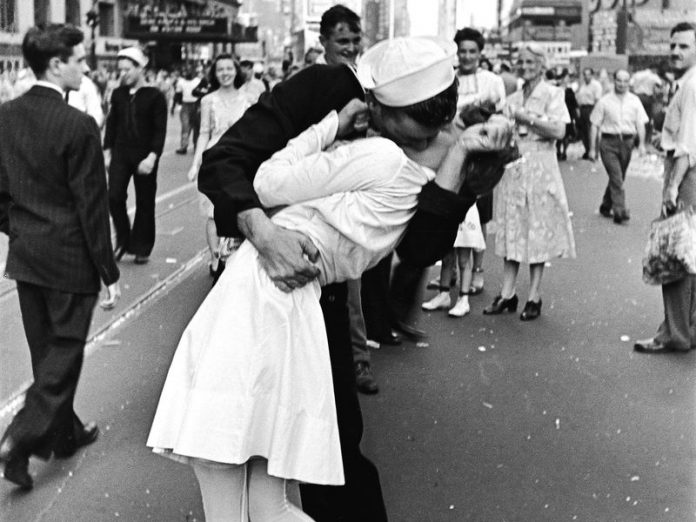 As one of the most famous American World War II era photographs circulated again in celebration of the anniversary of Victory over Japan Day on Friday, the New York Daily News ran a piece on the “sinister shade” the photo has taken on, as a supposed example of “sexual assault.”

But eventually, the identity of the man who is likely shown in The Kiss came to light. Unfortunately, it turned out the kiss wasn’t romantic. It was, by contemporary terms, probably assault.

The guy most likely to be the sailor is a man named George Mendonsa. According to a profile in the New York Post from 2015, Mendonsa was on date that afternoon — a first date — with a young lady named Rita Petry. The two attended a movie together at nearby Radio City Music Hall. Before the film ended, though, news spread throughout the city and the theater alike that the Japanese were surrendering. Manhattan (and for that matter much of America) turned into an impromptu party. People took to the streets, cheering, with alcohol flowing in celebration. Mendonsa told the Post that he himself had “quite a few drinks” before the pair made their way to Times Square.

“I saw this nurse coming down,” Mendonsa told an interviewer in 2015. “The war is over. The excitement of the war, and the drinking – and when I see the nurse, I grabbed her.”

Greta Friedman did not see the photograph until the 1960s. Although her face is obscured by the sailor’s left arm, she recognised her hair and outfit straightaway. But Eisenstaedt had not taken the names of his subjects, and there were many other claimants, notably a kindergarten teacher called Edith Shain.

She died in 2010, and in 2012 in The Kissing Sailor: The Mystery Behind the Photo that Ended World War II, the authors Lawrence Verria and George Galdorisi claimed to have established after exhaustive study of the details and circumstances that Greta Friedman and Mendonsa were indeed the “nurse” and the sailor in the famous photograph.

Greta was 21 at the time and taking a lunch break from her job in a Manhattan dental surgery.

The kiss was not “a romantic event”, she would remember in 2005, in an interview recorded for the Library of Congress Veterans History Project: “I went straight to Times Square, where I saw on the lighted bill board that goes around the building: VJ Day, VJ Day!…

“Suddenly, I was grabbed by a sailor. It wasn’t that much of a kiss. It was more of a jubilant act that he didn’t have to go back… to the Pacific… The reason he grabbed somebody dressed like a nurse [was] that he felt so very grateful to the nurses who took care of the wounded.”

She was born Greta Zimmer on June 5 1924 at Wiener Neustadt, Austria. As war loomed her parents, Max Zimmer, who owned a clothes shop, and Ida, sent her and two sisters to America (her other sister went to Palestine). Max and Ida Zimmer are thought to have perished in the Holocaust.