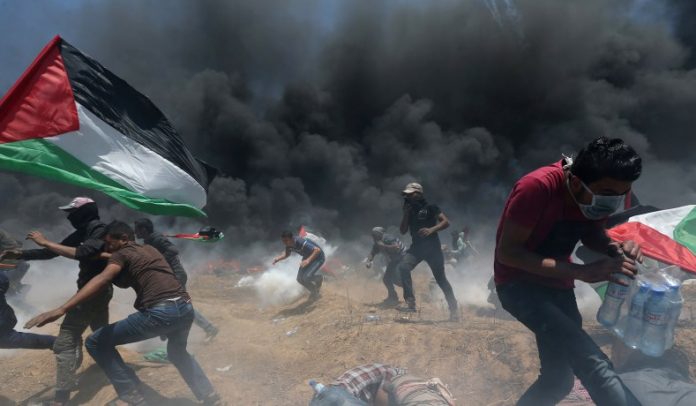 Palestinian officials said at least 59 Palestinians were killed, including six children, and more than 2,800 Palestinians were injured during their participation in the return marches that began in the Gaza Strip’s separation wall as part of the commemoration of the 70th anniversary of the setback, which coincided with the opening of the US Embassy in Jerusalem.

“Every country has an obligation to defend its borders, and Hamas has declared its intention to destroy Israel and send thousands to penetrate the border fence to achieve this goal. We will continue to respond firmly to the defense of our sovereignty and our citizens,” Prime Minister Benjamin Netanyahu tweeted.

Palestinian President Mahmoud Abbas condemned the “massacre,” while the United Nations said what was happening “is a flagrant violation of human rights”.

At the opening of the embassy, Palestinians see clear US support for Israel’s control of the entire city, including its eastern section, which the Palestinians affirm is their right to be the capital of their future state.

The opening ceremony was attended by senior US officials, including Ivanka, daughter of President Donald Trump and her husband.

What happened on the border with Gaza?

Palestinians have been participating in mass protests as they have been for the past six weeks in return marches.

The Israeli army said 10,000 “violent rioters” had gathered along the security fence and that its forces were operating “in accordance with normal procedures.”

How was the international reaction?

There were very conflicting reactions:

Why does moving the embassy cause all this controversy?

The status of Jerusalem and the right to rule it is at the heart of the Palestinian-Israeli conflict.

The international community does not recognize Israeli sovereignty over Jerusalem, and the final status of Jerusalem is to be discussed in the final stages of peace talks in accordance with the 1993 Israeli-Palestinian peace agreement.

Israel considers Jerusalem its “eternal and undivided capital,” while the Palestinians demand that East Jerusalem, captured by Israel in the 1967 war, be the capital of their future state.

Israel has occupied East Jerusalem since the 1967 war and has completely seized it despite the fact that there is no international recognition of it.

Since then, Israel has built dozens of settlements there, with some 20,000 Jews living there. These settlements are illegal according to international law, although Israel opposes them.

Trump’s declaration last year recognized Jerusalem as the capital of Israel to end decades of US neutrality on the issue, putting the United States in conflict with most of the international community.