HomePoliticsWashington will impose new sanctions on Tehran after the cancellation of the...
Politics 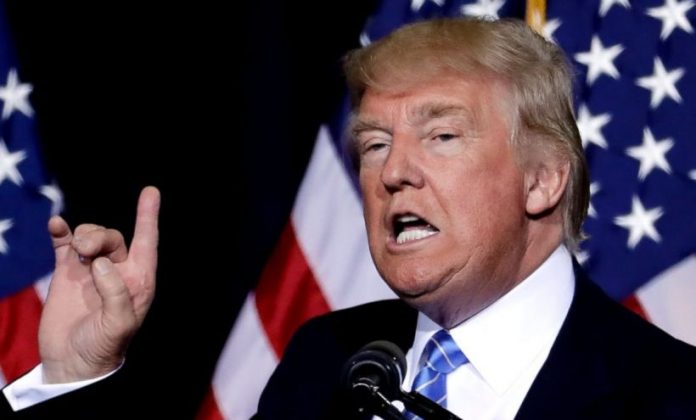 The US Treasury Department has revealed the details of sanctions to be imposed by the US administration on Iran, after US President Donald Trump announced the unilateral cancellation of the nuclear deal with Iran.

The ministry said companies and banks would have three to six months to end business ties with Iran. And warned the European companies that they will be punished if they continue their trade ties with it. As the multibillion-dollar deals with Boeing and Airbus will be canceled.

The United States plans to take additional measures to punish Tehran for its ballistic missile program and what it described as its malicious activities in the Middle East.

Trump announced the US withdrawal from the nuclear deal with Iran in a speech on Tuesday. And he promised that Washington would impose “the highest level of economic sanctions on the Iranian regime. Iran responded that it would “remain in agreement” with other powers without the United States. And the Iranian President Hassan Rugjani said his country would begin enriching uranium “at industrial levels”.

Trump said, in a speech from the White House, that the agreement did not and will not achieve calm and peace in the Middle East. And he expressed his belief that if the agreement continues, “a nuclear arms race will begin in the region”.

US Vice President Mike Bens informed members of Congress of Trump’s decision ahead of his announcement. and after the announced, Iranian President Hassan Rowhani announced that Iran would continue to agree with other powers without America.

“The United States has declared that it does not honor its commitments”, the Iranian president said. And he added in a speech broadcast on state television “I have ordered the Iranian Atomic Energy Commission to prepare to begin enriching uranium at industrial levels”. He also said that he would “wait a few weeks” to speak to allies and to those who are committed to the nuclear deal.

Trump’s decision came despite repeated warnings and political pressure from major powers to convince him of the landmark agreement signed in 2015.

The Russian Ministry of Foreign Affairs expressed “deep disappointment” over Trump’s decision and said in an official statement “There isn’t and can’t be grounds for violating the comprehensive joint action plan (the nuclear agreement)”.

The statement accused Washington of “undermining international confidence in the International Atomic Energy Agency. And all the other who signed to the deal – which they describe as historical – are saying that the IAEA, which carries out inspections in Iran, regularly confirms Tehran’s commitment to the terms of the agreement aimed at ensuring the peaceful nature of Iran’s nuclear program.

The US president gave his European allies in January to May 12 to tighten some of the points in the agreement, such as inspections by the International Atomic Energy Agency, and to gradually lift some restrictions on Iran’s nuclear activities from 2025.

But Trump criticized the deal at the time because it neither directly address Iran’s ballistic missile program, nor Tehran’s role as “destabilizing” in the Middle East.

Israel announced that it had ordered the authorities in the occupied Syrian Golan to open shelters. And an Israeli army spokesman said that Israel had “spotted a series of extraordinary signs” among Iranian forces in Syria.

The spokesman appealed to the residents of the occupied Golan to “obey the army’s instructions”. And he assured that the Israeli army “is ready for different scenarios,” warning that any operation against Israel “will face a strong response”.

Hours before the Trump decision was announced, Iranian President Hassan Rowhani said in a televised speech that his country was seeking constructive relations with the world but would continue local development despite possible sanctions.

Iranian Vice President Isaac Jahankirri said on Tuesday that his country is ready for any scenario if Trump withdraws from the nuclear deal. and Tasnim news agency quoted him saying “We are prepared for any possible scenario … If the United States breaks the agreement, it would be naïve to negotiate with this country again”.

The Kremlin said that the US withdrawal from the nuclear deal with Iran will have dire consequences.

Dmitry Piskov, spokesman for the Kremlin, said in a press statement that there would be “inevitable consequences for any actions that lead to breaking these agreements”.

The French President Emmanuel Macaron has visited Washington two weeks ago in an attempt to persuade Trump not to abandon the deal, suggesting at the same time negotiating with Iran on a “new agreement” that would take US concern into account, the proposal that was supported by German counsellor Angela Merkel.


Facebook
Twitter
WhatsApp
Linkedin
Email
Telegram
Previous article
“Apple” proposes a strange solution to solve the problem of face ID
Next article
Google will launch a surprise in the summer … What is it?