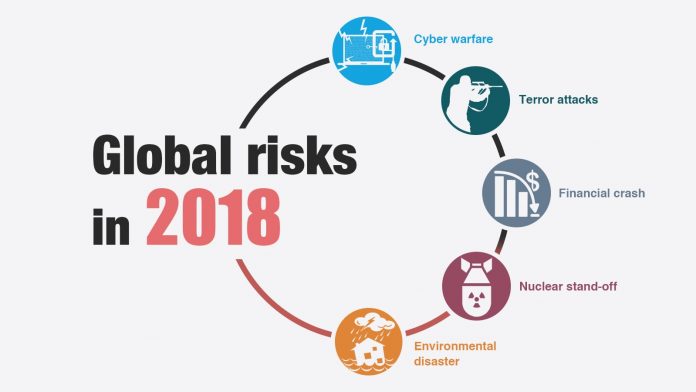 In 2018, experts are preparing to another year of increased risk, according to the annual Global Risk Perception Survey (GPRS). When about 1,000 participators were asked about their views on risk in 2018, 59% said they saw that the risk will increase, compared to 7% who considered the risk to be low.

The reason for the deterioration of the geopolitical landscape is partly due to pessimistic forecasts in 2018, with 93% of participators expecting that political or economic confrontation between major powers, while 80% expect an increase in the risks associated with wars involving major powers.

The World Economic Forum in 2018 of Global Risks Report concludes that the prospect of strong economic growth in 2018 gives leaders a golden opportunity to deal with signs of severe weakness in many of the complex systems that are an essential part of our world, such as societies, economies, international relations and the environment.

The report points out that the world is struggling to cope up the way of rapid change, while also highlighting many fields which push systems to the brink of the abyss, starting rates of biodiversity loss – sometimes reaching extinction – and ending with growing concerns about the possible of new wars.

The environment has been a source of concern for all experts. Some of the 30 global risks that experts were asked to identify by their degree of probability and impact, came the five environmental threats, extreme weather events, loss of biodiversity, degradation of ecosystems, major natural disasters, man-made environmental disasters and failure to mitigate and adapt to climate change, In the upper ranks of both dimensions (probabilities and impact). The “extreme weather phenomena” have captured the highest ranking because they are the most dangerous.

According to the results of the annual Global Risk Perception Survey (GRPS), cyber threats are increasing, and large-scale cyber-attacks are third in terms of probability, while high reliance on the Internet has been classified as the second most important global risk factor over the years for the next ten years.

The economic risks do not stand out with the same strength this year, some experts have been concerned that the improvement in global GDP growth rates may lead to some degree of satisfaction with the continuing structural risks of global economic and financial systems. However, “inequality” ranks third among the main risk factors. The most common link between risks is the negative consequences of technological progress, high structural unemployment or lack of employment.

In this year’s Global Risk Report there are 10 “What if” scenarios that will provide global leaders with an insightful intellectual material that encourages them to assess potential future shocks that could disrupt their worlds quickly and radically:

Trade death: The increase in trade wars and their aftermath, while multilateral institutions are far too weak to respond.

To the abyss: The tyranny of a new financial crisis on policy responses and the stimulation of global chaos.

Initiation of inequality: the possibility of strengthening the gap between social classes through bioengineering and awareness-enhancing drugs.

No rules war: The conflict between nations has unexpectedly escalated in the absence of agreed rules on cyber warfare.

Geopolitical identity: The national identity is becoming an increasing source of tension around the disputed border under the geopolitical flow.

Wall demise: lifting of Internet restrictions, as a result of cyber-attacks, and protection and differences in electronic regulations.

Facebook
Twitter
WhatsApp
Linkedin
Email
Telegram
Previous articleGoogle will launch a surprise in the summer … What is it?
Next articleWays to control children’s use of smart devices

British Health Minister Matt Hancock announced, on Sunday, that the new strain of the emerging corona virus has already spiraled out of control. The British...
Read more
Politics

US officials announced that several agencies of the US Department of Energy had been breached as part of a major attack by a hacker group that had electronic access to more than a dozen US federal agencies.
Read more
Health

The United States counted, on Wednesday, more than three thousand deaths from the new Corona virus within 24 hours, which is the highest daily...
Read more