Ways to control children’s use of smart devices

Smart devices have many advantages when children deal with them, and they have a lot of harms, so we have to control the children sitting in front of them. Here are the most important ways to achieve this.

We live in the age of technology, and it is difficult to stop our children from using smart devices, so the mother is confused between leaving her children to enjoy it or stopping them not to negatively affect their health and behavior.

Often the mother is forced to leave her child for long times in front of these devices because of her busy schedule with other things, so it becomes a way to get rid of the burden of taking care of the children, and therefore they used to sit in front of them for long time and it became difficult to deal without them.

The harms of children use of smart devices 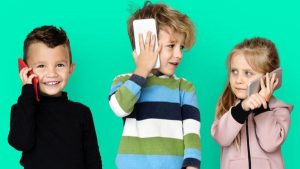 There are many harms that affect the child in case of sitting for long times in front of smart devices, which are:

Health Damage: Looking at smartphone or tablet’s screen for too long affects the health of the eyes, as well as other devices such as laptops lead to problems like back and backbones pain.

Neglecting study: The child prefers to sit in front of these devices more than the memorization of lessons, and always think of it even while in school, which distracts his attention and makes him unable to cope up his classmates.

The tendency to introvert and isolation: Because the child finds more fun in electronic games and prefer to stay in front of it for hours longer than sitting with people, and with time he gets used to this and can’t live without it.

Obesity: With too much sitting and immobility, and the child can become more overweight and full, and tends to laziness and lack of movement.

Sleep Disorders: The child may give up sleep to play on the tablet, so sleep does not become regular and affects his activity and his life in general.

Doing wrong behavior: Some children turn to hide things from their mothers, and they tell them that they are asleep and sit in front of the electronic device and used to lying and some other bad behaviors.

Ways to control child’s use of smart devices

Every mother is aware of the importance of these smart devices in the lives of their children, as they play a large role in their education and development of their mind and their growth, but we must control them sitting in front of these devices so that these advantages do not turn into disadvantages, harmful to the children.

How can this equation be achieved? Here are the most important ways:

It’s hard for a mother to tell her child don’t sit in front of his tablet now, but it’s easier to have fun alternatives too, like asking him to make a paper game, and the technology can be used to print the steps of making a doll or any cartoon character loved by the child.

Also, you can bring some food for the child and give him the opportunity to create such as pasta or pistachio peel to color it and make a variety of forms, and other ideas.

In case you are busy with some things in the kitchen, you can ask your child to help you accomplish some tasks, such as arranging some things, this makes him feel responsible and at the same time enjoys it.

But this must be under your supervision and follow-up, so he won’t hurt himself.

Instead of completely preventing your child from using smart devices, play with him, so that he’d be guided to learn and not to waste time.

Suggest a new educational game on your tablet, to make him prefer useful game than those that are worthless.

This also applies to the content that is watched, it should be appropriate for him and his age, because there are contents that appear to the child automatically and attract attention, but they do not really fit him in some negative behaviors such as violence or behaviors that do not suit the Arab societies.

Different activities are your way to make the child leave the smart devices a little, so let him practice the hobby he loves, as well as the sports activity that tends to him, it is much better than sitting at home and feeling bored and therefore resort to sitting for long periods in front of smart devices.

If you feel that your child has a talent, support it with the equipment that you need, for example, if your child likes music, bring him his favorite instrument, even if it is a small machine for beginners and not for professionals.

If the child is used to being completely free to act and has the opportunity to sit on digital devices as he pleases, it is difficult for you to control the matter later when you find it too much.

So, from the beginning, you should give your child time to these devices, time to study, to eat, and time to sleep, to become organized.

Preferably the electronic devices should not exceed an hour a day, talk to your child and explain to him why you should not do this, it is necessary that you get your point of view and discuss with him instead of telling him not to do so without reasons.