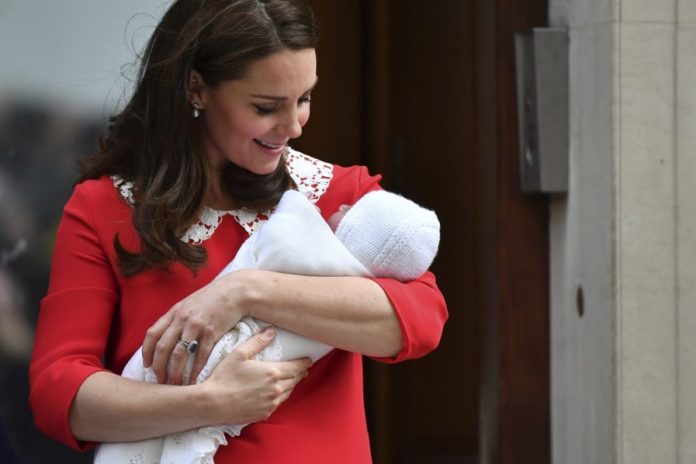 You would think, with just a birth weight and a delivery time to go on, plus a few words on the steps of a hospital, there was not a huge amount to write about Monday’s royal baby news. But collectively the British press managed to fill more than 80 pages of print with the new Prince of Cambridge. Here are some of the, fascinating things we learned from the extensive coverage.

Enjoy it – three is the limit

According to body language expert Judi James in the Sun, this could be the last time we see the Duchess of Cambridge emerge from the Lindo Wing with a newborn. The Duke of Cambridge “stood slightly away from his wife with his hands clasped across his lower torso in the “fig leaf” pose”. A self-protective barrier, apparently, which signals he does not want another child. However, he was commended for lightly rubbing his wife’s back and holding her hand with entwined fingers.

Was it fair to call the new baby a “porker”?

Royal data journalism, in the form of league tables of royal baby weights, informed us that the new child was nearly a record-breaker. There was also discussion of Sky News’s Kay Burley referring to the new arrival as a “porker” during the seemingly endless hours of coverage she anchored from outside the hospital. For what it is worth, Savannah Philips, now 15th in line to the throne, retains her crown as the heaviest royal baby of the past 100 years.

A Royal baby dressed for the occasion

The baby was wrapped in a shawl from GH Hurt & Son. This is an important tradition, dating back to 1948, when the Nottingham company presented Queen Elizabeth II with one in which to wrap the infant Prince Charles. They have continued to supply them ever since. The continuity was especially welcomed by the Daily Express, which noted that the Cambridge’s Spanish nanny “has often dressed George and Charlotte in Spanish clothes”. The horror!

A new car for a new baby

Avid royal-car-watchers will have noticed that the duke drove away in a Land Rover Discovery, whereas the car that carried Prince George was a smaller Range Rover Vogue SE 4.4 V8. The car seat for the new baby, we are told, cost £110.

Prince Andrew is free to marry at last

Due to a rather curious provision of the Succession to the Crown Act 2013, only the first six people in line to the throne have to ask the Queen’s permission to get married again. As a result of the new arrival, Prince Andrew slips to seventh in line – and can now elope without telling his mum.

He could grow up to be a money-maker

According to the Sun, the new child could be a money-maker, having been born a Taurus. In the Daily Mail, Oscar Cainer promised that “there will be aspects of his personality that will mimic the ox’s beast-of-burden traits”. The Daily Mirror’s Russell Grant observed that “babies born on this day for English patriots will be as charming as they are stubborn, with strong likes and dislikes”, a description that could be applied to most people.

Nobody in the British press likes that fake town crier!

Tony Appleton has made a habit of calling out an announcement of the birth of a royal child outside the hospital. At least one US news network broadcast it as an official proclamation. In the domestic press, though, Appleton was referred to acidly as a “self-proclaimed” town crier.

The weather did not escape the royal frenzy

Even the Daily Express’s front-page weather forecast got a royal makeover on 24 April. Its masthead declared that the UK would have weather “fit for a prince”.

Perfecting the perfect look to perfection

There was lots of comment on just how perfectly groomed the duchess, who had been visited by her personal stylist, looked within hours of giving birth. Sam Carlisle in the Sun informed us that the duchess’s feat of walking down four steps in high heels was “the new mum’s equivalent of running the marathon”. The shoes, we are reliably informed, cost £513.

Wearing the same clothes twice can be called clever recycling

The Daily Mail’s souvenir supplement included a two-page spread on “How clever Kate recycled her baby bump look”, which to the layman appears to be pictures of a woman wearing clothes more than once because she chose not to, for example, throw away a fuchsia Mulberry coat worth £1,500 after she finished being pregnant with Princess Charlotte.

No, not in prison. Apparently, the super royal fans who camped outside for 15 days in advance of the birth were given showers and porridge by the hospital.

Those other “random” parents

A couple of papers ran pictures of bemused couples emerging from the hospital clutching their new babies, to be met with a barrage of well-wishers and the world’s press photographers. Whether it was accurate to describe them as “random” parents are another matter – the Daily Mirror informed us that a one-night stay and delivery package at the Lindo Wing, excluding consultants’ fees, will set you back £7,500.

You can have royal news both ways

The Independent took a sniffy view, posting on its Facebook page a link to an Indy100 article “Woman gives birth to baby boy”. Unfortunately, this askance take on the news was undermined, since only five hours earlier – on the same Facebook page – the Independent had posted a breathless, “BREAKING” story that said the duchess had gone into labor. Caught red-handed trying to have it both ways – as, indeed, we may be doing with this article.


Facebook
Twitter
WhatsApp
Linkedin
Email
Telegram
Previous article
After his standoff in the US Congress Mark Zuckerberg flees from the questioning of British Parliament
Next article
How To Deal With Narcissistic Parents?