Mars is about to get its first internal checkup. The InSight lander, set to launch at 7:05 a.m. EDT on May 5 from Vandenberg Air Force Base in California, will probe the Red Planet’s innards by tracking seismic waves and taking its temperature.

Finding out what Mars’ interior is like could help scientists learn how the Red Planet formed 4.5 billion years ago, and how other rocky planets, including Earth, might have formed too. “It’s going to fill in some really big holes in our understanding of the universe,” says principal investigator Bruce Banerdt, a geophysicist at NASA’s Jet Propulsion Laboratory in Pasadena, Calif.

Mars is the perfect planet for this project: It’s large enough to be geologically interesting and, like the Earth, has a core and mantle beneath its crust. But the Red Planet isn’t so large and geologically active that its crust is constantly changing and erasing evidence of what it was like in the past.

InSight — short for Interior Exploration using Seismic Investigations, Geodesy and Heat Transport — was originally scheduled to launch in March 2016, but was pushed back because of equipment failure (SN Online: 12/23/15).

Assuming it reaches the surface of Mars in November, as planned, InSight will investigate the planet thousands of kilometers below the surface using two main instruments: a seismometer and a heat probe.

InSight will land in the flat, smooth plains of Elysium Planitia near the Martian equator. The spot provides relative calm, geologically speaking, and ample sunlight for powering the lander. The landing sites of previous Mars surface missions are shown as well. 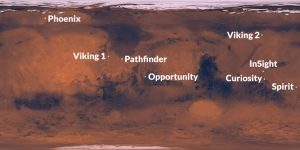 The seismometer will measure seismic waves rippling through the planet, similar to the way geologists study the interior of the Earth (SN: 9/16/17, p. 11). These waves move at different speeds through different materials, so tracking the rate at which the waves move can help scientists paint a detailed picture of Mars’ insides.

“We have spent a lot of effort scratching at the surface of Mars, but InSight is one of the first missions really dedicated to exploring the other 99.9999 percent of Mars,” says planetary scientist Matthew Siegler of the Planetary Science Institute, based in Dallas, who is not part of the InSight team. “We want to know what it is truly made of, not just the thin candy coating.”

Thanks to previous measurements of Mars’ gravity, astronomers expect to find a metallic core and a relatively dense mantle but aren’t sure how large or dense each layer might be. Measuring these details precisely “will make a lot of models go into the trash,” Banerdt says.

Many of the Earth’s seismic waves are created by earthquakes rippling along tectonic plate boundaries. Mars lacks plate tectonics, but it still has smaller “Marsquakes,” triggered by the crust’s cooling and contraction. That process releases “little cracks and pops,” Banerdt says, which “on a planetary scale are quakes that can shake down buildings.”

The seismometer will also sense seismic waves rippling from Martian surface impacts, as well as gravitational tugs from Mars’ moon Phobos that periodically make the planet bulge by less than a centimeter. Measuring that bulging may yield information about the size and squishiness of the core, which in turn could help explain why Mars lost its magnetic field (SN Online: 3/27/18).

In addition to measuring faint ground vibrations, the seismometer is sensitive enough to pick up winds, temperature shifts and leftover magnetism in the rocks. So, InSight’s seismometer will also carry a weather station and a magnetometer to make sure the team

can subtract out signals that don’t come from underground. These weather measurements could potentially be used to plan future human missions to Mars (SN: 1/20/18, p. 22).

To check Mars’ internal temperature, InSight will dig into the surface and measure every half-meter down to 5 meters. Temperature changes over that small distance will probably be tiny. But they could be used to extrapolate to further depths and to calculate how much heat is coming up from inside, revealing how geologically active Mars is. More heat means more activity.

The spacecraft itself might look familiar: The design was reused from the 2008 Phoenix lander, which found water ice in Mars’ polar regions during its five-month mission (SN: 6/21/08, p. 10). But InSight has larger solar panels, which should allow it to measure seismic signals for at least one Martian year (about two Earth years). The lander will touch down near Mars’ equator to get extra sunlight.

InSight will be the first interplanetary mission to launch from California. The spacecraft will spend several months in transit. Once it lands, a robotic arm will pick up each of the instruments and gently place them on the ground over the following month or two.

“From then on, we’re very quiet — these instruments need to make their measurements in as quiet a situation as possible,” Banerdt says. “Nothing much happens after that, except we get great science.”

The mission will also test a new way to relay that data back to Earth. InSight will carry the first interplanetary CubeSats — a pair of tiny satellites called MarCO that will be dropped off in Mars’ orbit. While other existing Mars orbiters will send back much of InSight’s information, the lightweight CubeSats will be tested at the task.

“We’ve been working to get a mission like this for 25 or 30 years,” Banerdt says. “It’s really an incredible rush to be getting close to launching this thing.”

You can watch the launch coverage starting at 6:30 a.m. EDT on NASA’s website.