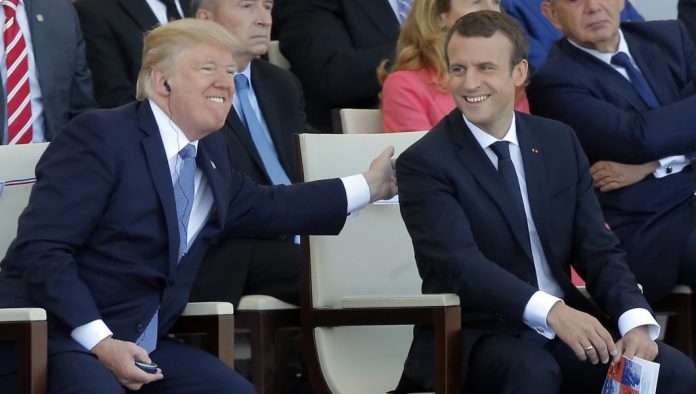 French President Emmanuel Macron announced on Wednesday, April 25, 2018, in Washington, he believes US President Donald Trump may pull out of the Iran nuclear deal next month “for domestic reasons” while diplomats revealed that European countries are close to reach a plan to convince president Trump to maintain the agreement. Macron told US media that while he did not know specifically what Trump will decide, he believes the US leader “will get rid of this deal on his own, for domestic reasons.” according to AFP.

Trump — a fierce opponent of the July 2015 agreement signed by Tehran and international powers — must declare if he will essentially walk away from the existing deal when the renewal deadline arrives on May 12, or stay in.

Macron had come to Washington in part to plead for a more comprehensive “new agreement” that would address what he and Trump believe to be shortcomings of the existing accord. Trump has branded the current agreement “insane” and the “worst” in history.

“I have no inside information” on what decision Trump will make on the agreement, Macron told journalists. But “I listen to what President Trump is saying and it seems to me that he is not very eager to defend it”. Macron recalled that Trump made killing the Iran nuclear accord a campaign pledge during his 2016 presidential run. The rational analysis of all his statements does not make me think that he will do everything to maintain” the agreement signed with Iran to prevent the Islamic republic from acquiring an atomic bomb.

Asked whether such a decision would signify a personal failure for him, Macron stressed that his role “is not to try to convince President Trump to walk away from his campaign commitments.” Instead he offered further defense of the deal, saying “I’m trying to prove that this agreement makes sense.”

European diplomats told Reuters that meetings behind closed doors over a period of three months would result in a series of separate actions, which could be taken against Iran, to satisfy Trump while maintaining the agreement.

At the same time, Western diplomats told Reuters that Britain, Germany and France are close to a plan to be presented to US President Donald Trump, to persuade him to maintain the agreement.

Brian Hook, the chief US negotiator with the three European nations who are seeking a way to keep Trump in the deal before his self-imposed May 12 deadline.

“We’re not there yet, but we’ve made some progress.” Hook told National Public Radio in Washington. ““This is about convincing President Trump, it’s not a new deal with Iran,” said a senior European Union diplomat.

Christopher Ford, U.S. non-proliferation envoy, told the journalists: “We are not aiming to renegotiate the nuclear deal or reopen it or change its terms, we are seeking a supplemental agreement that would in some fashion layer upon it a series of additional rules.”

The proposal that Macron put forward to his US counterpart involves preserving the existing agreement on the first of “four pillars” of a future deal.

The others would address the period after 2025, when certain clauses concerning nuclear activities will sunset, Tehran’s highly controversial ballistic missile program; and its “destabilizing” role in the region.

“For me it’s progress, it avoids falling into the complete unknown if the US decision is a hard exit,” said Macron, who confirmed that the proposal was a strategy coordinated with European partners and not a unilateral one.

Facebook
Twitter
WhatsApp
Linkedin
Email
Telegram
Previous articleMark Zuckerberg keeps his messages with you but you don’t have the same feature!
Next articleAfter his standoff in the US Congress Mark Zuckerberg flees from the questioning of British Parliament