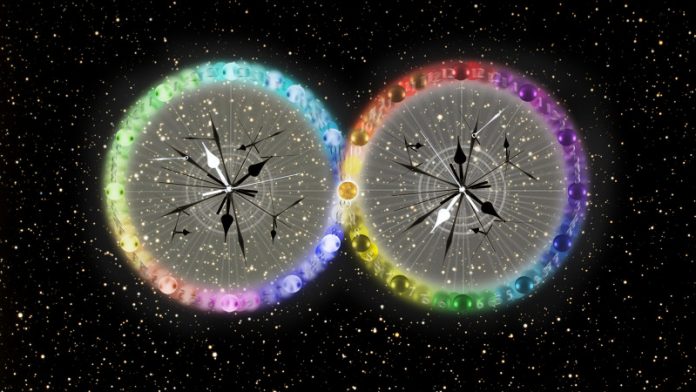 Einstein’s successor, Rovelli, scientifically proves that there is neither the past nor the future

Although we use it to measure age, and count hours, days and years, there are those who deny the existence of time. “Passes” and moves like a great river, recklessly compels us, to throw us in the end on its shores and continue its movement. This is what language tells us about time about “something” flowing; it moves in a perpetual horizon way as it pushes forward. Poets tell us that time slows down or stops; that the past often follows us without a way to escape; so, it remains present in objects, persons or places.

Carlo Rovelli is a theoretical physicist who wants to discover a whole new dimension in his field. It has been sold out of his book Seven Brief Lessons on Physics with its fascinating brief articles that includes topics such as black holes and quantitative physics, 1.3 million copies around the world. Now his book The Order of Time is coming up, it is a dazzling poetic work, according to a report description of the British Journal the Guardian that reported a long talk with him. Rovelli – A fun little man that has more than 60 years – misses his past. Ha lives in the French city Marseille where he runs a group of quantitative gravity in the center of theoretical physics since 2010. Before he works at the center, Rovelli stayed at the United States in Pittsburgh University for a decade.

His experience with hallucinations drugs made him care about time

he said that it was too radical, then the hallucination drug (LSD) has shown which he took for a few times, and then he realized that it was the seed from which his interest grew in physics in general and the matter of time in particular. “Among the strange phenomena I had experienced when time stopped. Things were spinning in my head but the clock was not moving forward; time wasn’t flowing   in any way. It was a state of total damage to the structure of reality. ” After this experience, he asked himself: How do I know that my usual perception of things is correct, and that this was hallucination? And if these two methods are so different, what does it mean for one of them to be true?

His readings of Einstein taught him that these theories were neither true nor false.

He has lived a similar experience, in Calabria the Italian city on a sunny warm beach, reading Einstein’s works. He looked up from his book to the sky and the sea, imagining that the world was not as it appeared to him every day, but on the image of the unbridled space-time that the great physicist described. The truth is that – as mentioned in the title of one of his books – is not what it seems. You can say that Rovelli’s work as a physicist is filling the great space after Einstein on the one hand, and the evolution of quantitative theory on the other. If the theory of general relativity takes place in a world of wavy space-time where everything is continuous, quantitative theory describes a world in which different amounts of energy interact. As Rovelli explains: “Quantum mechanics can’t deal with space-time wrap, the general relativity can’t explain the quantities”. Both theories are successful; however, their apparent inconsistency is a problem without specific solution, and one of the current tasks of theoretical physics is to try to create a conceptual framework in which the two theories work together. Rovelli’s field of quantum gravity theory provides a possible solution to the problem, looking at space-time itself as a fine structure made of episodes, the string theory offers another way to solving the problem, neither right nor wrong in Rovelli’s view, “If you asked me, who is the person that has the biggest and greatest list of results? Without any doubt I will say Einstein. But if you asked me, who is the scientist that made the greatest mistake? I will also say Einstein”.

His theory of time’s function and our confused human perception

Rovelli believes that there is more to it than that: Time itself disappears at the most basic levels. It’s just a function that serves our “confused” human perception. Why is our knowledge limited to the past, not the future? The key to this is the flowing heat from the hotter to the least hot direction of the elements. For example, if a cube of ice fell into a cup of coffee, it will cool it down, and the opposite is true. It is a one-way street, just like the second law of thermodynamics.

Rovelli tries to write on many levels. “I’m thinking of the one who has no interest in physics, not just who doesn’t have any knowledge of it. So, I think that I’m writing as if I’m talking to my grandmother, who was a housemaid. Or to a young physics student; and at the same time as I’m writing, I imagine my friends reading. That’s why I try to talk at different levels, and always consider the one who know nothing about physics”. His biggest fans are those who have a small knowledge of physics and his colleges. Most of the criticizes he gets, comes from the people who are in between those two types that have a small knowledge of physics. He doesn’t perfect school physics very much, “who would care to calculate how fast a ball falls? If I get the chance, I would like to write a school book in physics”.

His wide knowledge comes from History and Science

What makes his writing glamorous is its wide cultural compass and his knowledge of history and science. He is a lecturer of history of science. In his lectures, he likes to include his students of human sciences and nature sciences together. As he brings up scientists like Einstein, Ludwig, Boltzmann and Roger Benrose, his writings also include politicians, poets, and musicians such as Brouts, Dante and Beethoven – La Sima Horas – as each chapter begins with a symbol of this Roman poet as if he was intending to bury us in a human emotions and feelings before he travels with us to the un predictable world of black holes, rotary foams and the clouds of possibility.

Rovelli does not see a contradiction between the vision of the universe that transmits human life to something minor and out of context, our daily happiness and sadness. Or in fact between the “cold science” and our inner spirituality. “We are part of nature, as well as pleasure and sorrow aspects of nature itself; nature is richer than just a cluster of atoms,” Rovelli tells me. Rovelli has the talent to make comparisons that dig into memory. He tells us, for example, when explaining that the smooth “flow” of time is illusion, “the facts do not make a line that goes as accurately as the English, but a crowd that gets in a mess like the Italians.” He also says that “the concept of time faded layer by layer and piece by piece, and what’s left to us is nothing but an empty scene that the wind hits is almost empty of any sign to the time quality … a completely empty world, fascinated by ab annoying dry beauty. Rovelli believes human qualities are love, fear, desire and passion, and that they all become meaningful when they are part of our short lives, which is a small part of time.